A resource for those interested in collaborative/participatory and creative/arts-based approaches to research.

Andy and Julie’s zine: power and privilege in research relationships 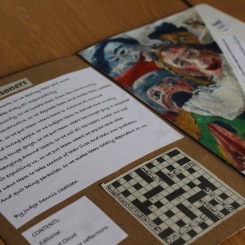 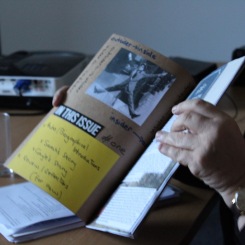 Gayle talking through their zine

Gayle and Sarah’s zine: back page

Inside ‘Beyond Bars’ zine

Andy and Julie: When we were discussing a potential topic for our zine, we were both drawn to the notion of how we use ‘the self’ in both applied social work and participatory research practice. Julie recounted a story about ‘emotional labour’ (Hochschild 1979, 1983) during recent research encounters and the demands and intensity of ‘the interview’, whether this is online as in her doctoral research (Parsons 2014) or face-to-face. We agreed that there was a need for self-awareness and management of the power and politics inherent in all research (professional) relationships. Andy mentioned an identity questionnaire he uses with his students and how important this can be when thinking through one’s sense of self. Also, how it might be used when negotiating power and privilege in research relationship (indeed in all relationships).

When putting the zine together we decided to include a word cloud as a centre piece. So, we searched for words that might relate to the task of ‘narrating the self’, which is both an individual and social activity, as Lawler (2008:13) notes:

“narratives give a means to understand identity in its sociality, since narrative identity places us within a complex web of relationships and, ultimately confounds the notion of the atomized individual”

Of course, identity is a performance with front and backstage processes at work/play (Goffman, 1959), it is mutable, temporal and in a continual process of becoming (Deleuze and Guattari, 1998). This is symbolised in the incomplete crossword puzzle on the inside of the front page. We included the ‘Prisoners’ poem by Judge Dennis Challeen, as this is about the power of the prison system and the ‘mortification of the self’ that occurs in total institutions (Goffman 1963). We looked for images of faces to include in the zine. ‘The woman in hat (Olga)’ from Picasso (1935) and its abstract cubist form seemed fitting for the cover. Inside, a cutting from ‘The Intrigue’ (1890) by Erwin Ensor, with its masked, slightly macabre looking faces.

On the back cover in contrast to the abstract forms on the front and inside, a photograph of three women covered in mud, emphasising the embodied and visceral nature of identity, above an empty face in a picture frame, a sense of a ‘self’ waiting to be fulfilled (maybe after the completion of the questionnaire). To accompany the editorial on the back page are faces and images, including one of a plastic duck and a ‘real’ duck, which troubles the notion of a ‘real’ inner self.

We enjoyed the process of creating the zine together. It too was an exercise in power and privilege. Indeed, we are arguably mostly in a position of privilege (though not always powerful) as witness to the other’s story during research encounters.

Gayle and Sarah: Our zine is entitled insid(er) / outsid(er) and in it we explore, independently and together, our relationships to creativity and the experience of working and being with offenders. Our aim is to highlight the differences between us in terms of our identities and experiences and also to draw together our similarities. We begin with the classic image of the comedian Harry Worth standing at the corner of a shop window and raising his arms and legs to give an illusion of floating. For us this picture perfectly depicts the complexity of being inside and outside and insider and outsider at the same time. Following our brief auto/biographical introductions we each reflect in some detail on how our personal and work identities play out in terms of creativity and empathetic and participatory working.

Over four pages Sarah outlines how her interest and expertise in the arts led to her work at LandWorks. The first two pages display a collage created during the residency, which broadly represents freedom, empowerment, and journeys. It explores the ground where her personal and professional self/selves meet, the commonalities – that for transformation to happen first we imagine a future self, and then we create it. Creativity helps to allow the space where that imagination unfolds. This includes an acceptance that we cannot always understand or anticipate the end result before we’ve begun, and with change comes an element of risk that the desired outcome might not happen. Sometimes – not always – happy accidents occur, and we discover something unimaginable. All this unfolds in a microcosm (the creative world) and acts as a metaphor for the relative macrocosm or our everyday lives – creativity is largely about decision making and problem solving. There are more difficult meetings of personal and professional spheres, such as how much of ourselves we share with the people we work with, when it is especially important to build trusting relationships.

In her four pages Gayle draws on a personal experience (the short-term imprisonment of her husband, John) and details the ways in which this has influenced her in terms of the development of different, more creative methodologies and approaches in her work both within and outside of the academy. The first two pages include previous writings by Gayle, and an extract from a letter to her from John, that focus on the experience of the 91 days they spent apart. The backing here is two pages from the prisoner newspaper Inside Times. The background to the following two pages is Gayle’s previously created collage which represents the interconnections between her identities as researcher, as writer, as civil celebrant, as mentor, as volunteer, as activist and as traveller (both physically and metaphorically). Here too there are copies of Gayle’s writings reflecting some of these aspects of self.

As such we chart our different creative interests and journeys and end by using a series of words and phrases to represent our shared understanding of the values of such work. As noted above in our individual sections we each used a black and white copy of our collages (produced earlier in the week) as a backdrop to part of each of our stories. This helped us to portray further the relationships between our public and private identities and the overlap between these. In sum we feel that our zine represents a work in progress as it focuses on where we both are now. With this in mind we present it as issue one. Maybe there is more to come …

Geraldine, Jon and Sarah: We chose to call our zine Beyond Bars. The choice of title reflects conversations that we had during our time on the residential and our respective roles. For us Beyond Bars encapsulates a shared understanding we have, and a wider appreciation we share, of the different ways and reasons people may come into contact with the criminal justice system. Throughout the day we were aware that a focus of contributors identified the significance of three key factors, the importance of:

We included a contents list on the back page to represent the messy and contradictory nature of the criminal justice system and the lives of those affected by it. The main body of our zine consists of our auto/biographical collages as well as summaries of the contribution of two speakers from the first day of the residential; Nick Hardwick and Erwin James.

We include an insight about who we are as people, practitioners and researchers. In doing so, our aim is to highlight our connection to what we do and how we do it and how own identity can potentially shape practice and research. Nick Hardwick’s presentation encouraged us to think about the context in which men and women in the UK are incarcerated. His presentation pointed us to the myriad of way in which prisons are failing not only prisoners, but their families and the wider community. In creating or zine we wanted to emphasise the idea of prisons being in crisis and did this through including statistics and images symbolic of this failure such as a toilet situated in close proximity to a bed. We feel that this represents the inhumane living conditions in some prisons.

We also drew on humour– represented by a cartoon from Inside Time that draws attention the lack and/or inadequacy of health care for many prisoners. These examples point towards the way that prisoners are no longer considered an integral part of our communities and are a focus of discrimination. At the start of his presentation Erwin James posed a fundamental dilemma that faces all connected to the criminal justice system, those within it and wider society. Thus ‘How do we care for those who have hurt us?’ This question led to a range of conversations between us and we came to the decision to explore this question using words and images such as; looking at the criminal justice journey, using words such as ‘understanding’ and ‘inspiration’ and including the voice of a prisoner who had taken part in a research study. A key message we felt it was important to convey from Erwin was the belief that ‘everyone is born lovable’.

One thought on “Collaborative ‘zines’”